I figured out why the ACR didn’t flip to combined in time… right out of the documentation:

Internal time delay prevents relay action for transient conditions, voltage must be within range for approximately one minute to cause closure, relay will open when overvoltage is detected for approximately 15 seconds.

The regulator definitely went from an acceptable charging voltage to an overvoltage situation in less than a minute. 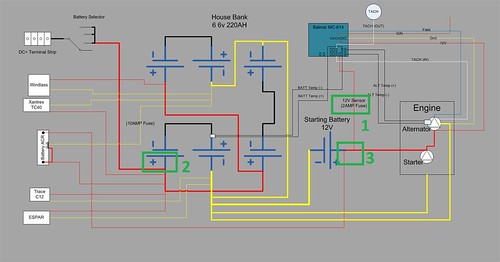 Not sure most of you will want to read this, but to my fellow boaters here goes…

When we had the engine out of the boat to replace the fuel tank we also decided to upgrade our alternator from a 65Amp model to a 100Amp model and to add a Balmar MC614 three-stage external regulator to increase our engine based charging capacity. We also made changes to our battery configuration. We combined all of our existing batteries into one 660Amp Hour (Ah) bank instead of two banks of 440Ah and 220Ah. We also added a single dedicated 12V starting battery.

The two key components in this are where the 12V Sensor wire (1 in the drawing) is attached, 2 the house bank or 3 the starting battery and whether the ACR has the batteries combined or not.

We still think that at some lever we’re correct in our assumption, however we now believe there is a race condition where the following happens:

The basic problem was the ACR didn’t combine and the regulator was getting mixed signals by monitoring a bank that was not being charged, since the ACR did not combine, while simultaneously charging the hell out of our starting battery. We believe this is what was happening at sea. We know for sure we have reproduced this at the dock.

In order to eliminate this we moved the 12V sensor wire from the house bank to the starting battery. Now regardless of if the ACR combines the battery banks or not at least the regulator is monitoring the voltage of the battery is charging when the ACR has the two banks isolated.

We tested this today and we were not able to get the regulator into an overcharge state. We’re going to test a few more times over the next few days. We’re also going to contact Balmar on Monday and Monty at Englund Marine is going to contact Blue Sea Systems to confirm what we believed happened and that our fix is correct and also just to check to see if they already know something about this happening before.

Another day another thing learned…. ya gotta love it! (DISCLAIMER: We’d love it a lot more if it weren’t foggy and rainy)

We’ve hinted at bits and pieces of this along the way, but I wanted to write up a more formal review of the changes we made this week while we had the engine out to replace the fuel tank.

Our original battery system was 2 banks of 4 and 2 6Volt batteries that were combined to make two banks of 220Amp Hours and 440 Amp Hours each. This was proving to be a bit limiting. I also suspect our batteries are waning and we’ll replace likely replace them further down the road. However, for now what we’ve done is create on large house bank combining all of these batteries into one 660 Amp Hour bank and we added a second 12V dedicated starting battery.

The new positive post of the new battery is wired directly to the starter and the negative joins the common negative bus in the house bank battery trays (i.e., they are wired together).

We already had a Blue Sea Automatic Charge Relay which combines both banks whenever it sees an adequate input charging current on either bank. For us this means that when the alternator is charging the starting battery it will combine and also charge the House, or when the solar and\or AC Shore Power Charger is charging it the  House it will also top-up the starting battery. This second possibility is called a dual sensing ACR and is somewhat less known about, read the Blue Sea Page on ACRs for more on that.

The battery changes should give us adequate power to not have to run engine for charging as frequently. However our alternator was only 65Amps and it had an internal single-stage regulator.

We upgraded our alternator to a 100amp Leece-Neville 8MR2401UA which was a physical drop-in replacement (same size, bolt pattern etc.) as our smaller 65Amp Leece-Neville. This was the maximum size we can run our engine with a single 1/2” belt.

The process seemed like it was going to be:

Seems pretty straight-forward and in fact all of that took a few hours. This is where easy goes crazy…. I was doing this over the weekend and all of the pre-tests Balmar says you should run using your voltmeter were not working properly. I spent at least a day tracing wires all over the engine compartment, under the cockpit floor and the lazarette to ensure I was wiring the thing correctly. But despite seeming to be wired correctly, in the end it wasn’t working right and the problem had to do with how much the new alternator and the old alternator differed from each other. The old alternator was case-grounded which means it was grounded through the way it was bolted to the engine. The new alternator was externally grounded which means you need to run a wire from the negative (-) post on the alternator back to the negative (-) on the batteries (our your common ground).

It took about an hour on the phone with Rich from Balmar and his patient troubleshooting guidance (and an emailed picture of my wiring) for him to come to the conclusion about my ground problem with the alternator. We borrowed a jumper cable from the always helpful Kyle Cox at Tarheel Aluminum Fabrication (he made our tank) and we tested our theory… BINGO! Everything was working yaay!!! Phone support, let me restate that. Knowledgeable, technical, skilled phone support is awesome thank you Balmar!

Now our alternator and regulator are working properly!

We're still in Charleston. Still trying to get all systems back online. The main part of the project removing the engine and putting in a new fuel tank are completed. Friday we along with Kyle from Tarheel Aluminum Fabrication lowered the engine back through the companion and set it on its new mounts! Saturday we finished hooking up the engine, new 100amp alternator and external three-stage regulator. This morning we start the engine for the durst tine and it fired right up, but the regulator is not coming on, which means we can't charge the batteries without shore power. the engine is also running a little hot.

I spent most of today working on the regulator with the voltmeter checking how things were hooked up. I won't bore you wight the details on that, but I think it's a problem with the ground and a call to Balmar tomorrow should resolve that.

As for the engine temp, we need to make sure there's no air in the cooling system which seems pretty straightforward.

In addition to all that Dawn has also been working n some teak projects, stripping the cetol from the hand railings in the cabin top and she sanded down the campionway hatch boards and trim. It's going to look amazing when she's done!!!

We are definitely feeling the need to head south, but also seeing that the immediate weather patterns aren't looking great either. When the engine is 100% we'll start looking to pick our window to jump to SF or maybe another intermediary stop like Port Orchard or Eureka.

When we were still on the dock at Shilshole we'd get asked all the time "when you going to be done?" And I'd always say, "never!" Well, in that spirit you should know that we're not done yet!

Today I worked on adding six new switches to control some functions of the AIS and power on/off various components of what we call the NavSystem. The new switches will allow us to turn off the transmit portion of our AIS to save power or avoid being tracked by CB. The other switches will allow us to turn off the PC, WiFi Bridge, LAN/USB Hub, and the NMEA 2000 network (instruments). All of these things used to come on or off all at once, now we can more granularly control our power usage, which us very good thing!! 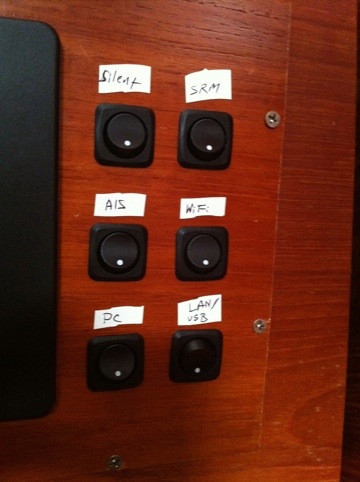 While at the Seattle Boat Show Dr. LED was showing some new under-cabinet LED lights. They have two models, one with white high & low and one with white & red LEDs. I bought one of the later and with the help of Dawn (since I only have one usable arm) we installed it. I had previously installed a Dr. LED MARS dome light over the nav station desk, but I was not happy with the brightness and directionality. The aft cabin is very dark and this light lit the desk in a spot, but did not provide much ambient light. 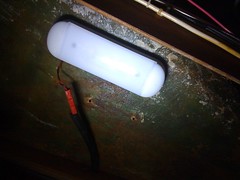 The light from the under-cabinet fixture is much more diffused and covers the entire nav desk very well. The dome light was much more directional and produced more of a spot.

We may use these lights throughout the headliner instead of the Alpen glow fluorescent lights.

I refer to Don Casey’s Sailboat Electronics Simplified, every time I have a pair of wire cutters or crimpers in my hand. It’s an awesome reference guide. I have a copy on the boat, one at home and now you can have one on your Kindle, Phone, or PC! It downloads in about a minute to the iPhone. An absolute must-have in one if not every format.

I’ve mostly been working on the rigging lately, but tonight I’m thinking about the NEMA 2000 powertap installation. The Maretron powertap looks like a normal NMEA 2000 T but it has MIDMicro cord coming out of T which you wire up to the DC power system in your boat along with a 4amp fuse (See yellow powertap in the picture). Maretron has a good knowledgebase article on how to do the install but in summary you wire a couple of wires to the 4amp fuse and DC +and the rest to DC –.

I have some other DC wiring I need to clean up that is wired directly off the batteries with no fuses and I don’t want to use a bunch of inline fuses, so I’m going to use a Blue Sea Fuse Block to fuse all these individual items, but do so in a way where I have a single spot to do troubleshooting and add-on future circuits.

I’m hoping to pick up the fuse block tomorrow so I can put in the T which is the first step to getting my NMEA2000 instruments online.

Checks from this week:

Mainmast wiring completed !!!  Fly me to an aircraft carrier; Mission Accomplished!! This was huge. I can’t tell you how many WEEKS I’ve spent working on the wiring in the mainmast to have everything working feels awesome!!

Chris Tutmark did the initial tune on the rig.

Put the outboard on the dinghy and took the Dinghy Princess for a ride last night. The ob fired up on the second pull after sitting on the stern pulpit all winter with no winterization. Yamaha is the awesome!!

Dawn painted the interior wood around the portholes in the head & shower and put the trim back up as well. Just need to re-attach the drip rails which she sanded and polyurethaned.

Lots and lots of stuff completed… many many pics to take and then some write-ups on some of the systems, how I installed things etc.

Before – just a bunch of holes and messenger lines for pulling wires. 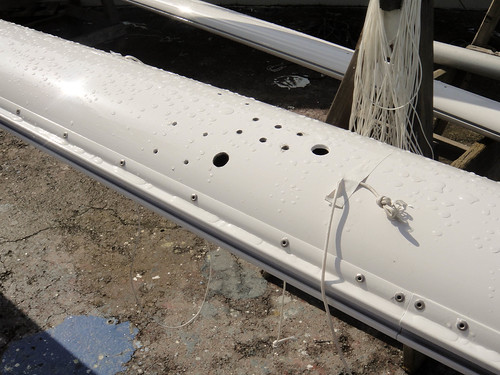 Notice the tangs for the main loweres, spreaders and the new foredecksteaming light. That wire sticking out is the feedline for the new spreader lights. 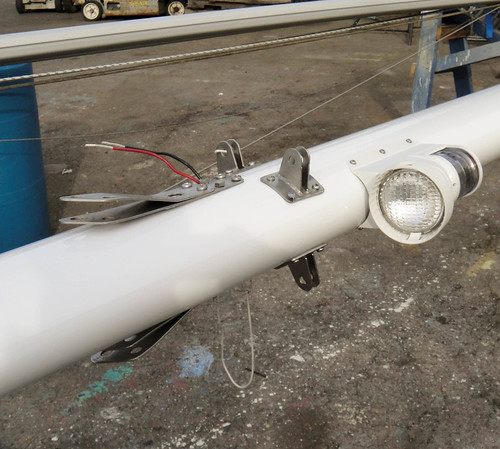