We're still in Charleston. Still trying to get all systems back online. The main part of the project removing the engine and putting in a new fuel tank are completed. Friday we along with Kyle from Tarheel Aluminum Fabrication lowered the engine back through the companion and set it on its new mounts! Saturday we finished hooking up the engine, new 100amp alternator and external three-stage regulator. This morning we start the engine for the durst tine and it fired right up, but the regulator is not coming on, which means we can't charge the batteries without shore power. the engine is also running a little hot.

I spent most of today working on the regulator with the voltmeter checking how things were hooked up. I won't bore you wight the details on that, but I think it's a problem with the ground and a call to Balmar tomorrow should resolve that.

As for the engine temp, we need to make sure there's no air in the cooling system which seems pretty straightforward.

In addition to all that Dawn has also been working n some teak projects, stripping the cetol from the hand railings in the cabin top and she sanded down the campionway hatch boards and trim. It's going to look amazing when she's done!!!

We are definitely feeling the need to head south, but also seeing that the immediate weather patterns aren't looking great either. When the engine is 100% we'll start looking to pick our window to jump to SF or maybe another intermediary stop like Port Orchard or Eureka. 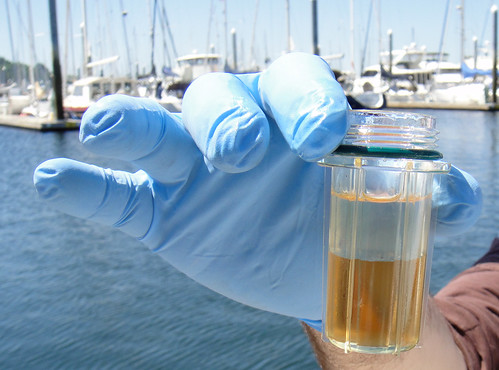 That is not a new layered drink I’m perfecting. It is a picture of what my newly installed inline fuel filter for the dinghy outboard caught on it’s inaugural run.

Last winter we were bad outboard owners and did not winterize the outboard, nor did we dump the gas into the car. So this winter the outboard wouldn’t run. I took it to the dealer to have the carb cleaned and we dumped the fuel. Roll forward several months, with new fuel (<1 week old) and supposedly clean tank and with clean carbs and after about the first hour of use it was conking out unless you left the choke open or closed the choke and quickly gave it half-throttle. It would not idle in gear.

I checked the inline filter in the engine and it was clean, but it only collects particles, not water. I decided the fuel was bad, but couldn’t prove it, so I got a RACOR 025-RAC-02 filter designed for outboards. Installation is as simple as mounting the housing to the dinghy transom, cutting the fuel hose and securing it with some hose clamps. When I ran it for the first time it clogged with water (that is what is floating on top) and BINGO I confirmed that a) this filter is awesome and b) I really did have a fuel problem!

I poured all the fuel into the car, rinsed the can with more fuel, poured that in the car and then set that can aside to let all the residual gas evaporate (it was sunny that week). We then bought an additional fuel tank because I figured this was not going to be the last time we had to do this. In looking at the new can I think the vent is vastly superior to the old one. The old one is basically a plastic screw you loosen to let air in while running. The new one also is loosened like a screw, but it seems to have an openclosed position, not adjustable and it also appears to have some sort of gasket or pressure closure so it only opens when it needs to. I think the new one will let in lass condensationrainetc. I do think having two fuel cans is a good idea either way.

Of course I later noticed as I walked the dock that one of our neighbors has one too… ah validation.

And with that bit of DIY help, I will leave you some music to go with this week blog title…