With a Maretron USB100 NMEA-0183 Gateway and an Actisense NGT-1 NMEA 2000 gateway I was struggling to get the NMEA data to all the applications on my PC, iPAD and iPhone. Many applications can not only connect to the an NMEA data source but also share the data on another TP Port or Virtual Com Port. Originally I was using a complicated stack of software all connected to each other to get data to some of the applications but couldn’t really use them all at once. More importantly which ever app I felt like using at the time might require starting up two applications!

Well in comes GPSGate Client (\$40) which lets you connect to a data source and then share it with many other applications.

You can see in the graphic below that I’ve dedicated the Actisense Gateway to Coastal Explorer. GPSGate is then connected to the Maretron Gateway and then it is used to serve up the data to 7 other applications some on Windows and some on my WiFi iPad and iPhone.

Also of note is that my preferred iOS navigation application Navionics works fine on the iPhone since it has a built-in GPS, but on the WiFi iPad there’s no way to get the NMEA data into the application. I’ve contacted Navionics about this and we’ll see if they add the functionality.

This is greatly simplified from the way I was doing it before and I’m very excited to not only have all this finally working but to have it working simply! \$40 for GPSGate was worth every penny! 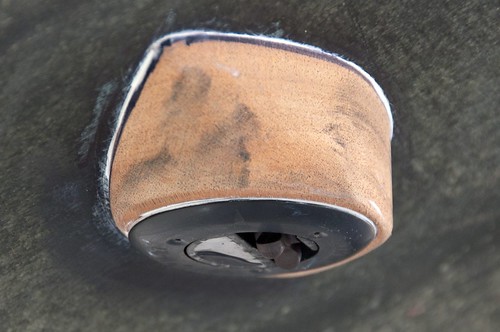 When we purchased the boat we had a non-working knot meter and a single function transducer with a display located only on an internal bulkhead in the aft cabin. The new gorgeously installed Maretron DST100 instrument will measure Depth, Speed and Temperature.

I just have to get a cable to hook it up to the NMEA 2000 network and we’re done!

Steve, a fellow burner and shipwright at Seaview, made that fairing block. It looks great and I’m sure will give us +.001 kts in boat speed. 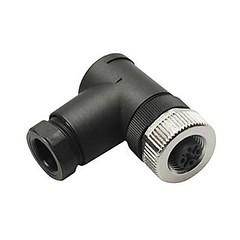 This is a Maretron FA-CF-90, it is a field installable right angle connector and it's what I need to finish the install of Maretron DSM250 the instrument display in my cockpit completing all the critical electronics systems.

NMEA 2000 connectors are keyed, which means when you're mating this right angle to a device, the angle might end up pointing up, down, left, right; who knows. The field installable connector can be rotated as you assemble it (or that's what support told me) so that YOU can choose which direction the cable leads off from the connector.

I still have two tank level meters to install and I want to upgrade the NMEA 0183 1980's depth transducr  to a combo Depth, Speed, Temp instrument and NMEA 2000, but when this bad boy arrives and I get the cockpit display installed we'll have reached a pretty major milestone and I will feel very cool!

God Speed USPS, bring my baby to me!!

The timing of this post is triggered by the fact that all the NMEA big wigs are here in Seattle so I thought I’d take a second and tell you my experience thus far.

Ben over at Panbo has been plugging together a stack of NMEA 2000 gear. I’m playing in more mixed environment. Most of my gear is new Maretron equipment, but I’m also connecting in the following gear that is not NMEA 2000:

Here are my experiences thus far:

I’ve tried connecting the DS50 via a Simrad AT10 (0183 to 2000) gateway and via an Actisense NGW-1. The depth messages are on the network but there is no offset being passed with the data. The Maretron DSM250 will not display the depth and neither will Coastal Explorer. NavMonPC did not either until a new build was released which stills shows depth (DPT) when the offset is missing.

Airmail and the SCS PTC-IIUSB

I can see the position data, but no heading, speed or weather information is coming through.

[Next Steps]: Can’t think of any right now, but this isn’t a priority at this time.

The location is displayed on my M504 display, but the timedate is wrong. Even when I configure the offset for pacific time.

I have more to say on this, mostly that the SW that is out there is still pretty weak, but I’m tired so I’ll whine about that later.

Here’s a quick step by step on how to use the Maretron field installable connectors. These are useful when you want to run a wire in a mast or through the deck and you don’t want to use a bulkhead fitting but you’d rather use something like a Blue Sea cable clam. There are NO instructions with these fittings so I hope you find this useful.

Here’s a shot of the disassembled connector and the raw end of the bulk wire. The white fitting and it’s rubber gasket give this fitting a snug water resistant (proof?) fit. 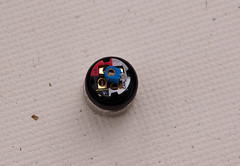 This is a shot of the little tiny holes and screws you’re going to be using to attach the wires to the connector. Everything it very well designed; the color coding makes this a snap. Note that the blue connection is stands approximately 1/4” proud of the other fittings. 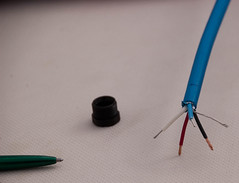 You need to strip back the outer insulation and the foil around the wires. The blue wire should be a bit shorter than the others since it doesn’t have to reach as far as the other wires. 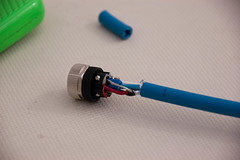 Here’s a shot with all of the wires attached to the connector. 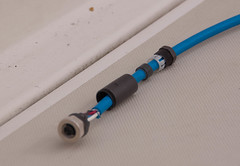 Notice in the that previous picture none of these other pieces are visible. they all need to be placed on the wire BEFORE you spend 10 minutes getting the wires attached and all the screws tightened. If you’re lucky and you don’t have a connector on the other end, you can slide them all the way along the wire like I did. DOH!

I started by tightening the body to the very end of the connector (the left side in this pic). I then worked on the final end fitting where the wire extends out. When you got to tighten everything up it will be a tad difficult to get the end fitting to tighten against the white cone and rubber bushing. I used the small screw driver to work the cone down as far as a I could. be careful, you can break the cone if you push too hard. You will figure it out though. I then used a Knipex Pliers Wrenches (which I LOVE but a crescent wrench would work) to hold the connector body while I bottomed all of the threads.

It’s obviously a lot easier to work with the factory installed connectors but where necessary the field installable connectors are pretty easy to work with and they look solid to me. 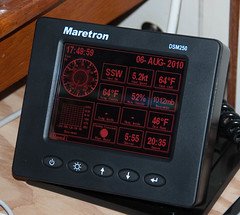 There’s a shot of my Maretron DSM250 (in red on block mode) displaying data from my NMEA 200 network I finished roughing in last night (or I guess this morning) about 0200. I’m calling it a rough-in because I still need to go back and secure all the wiring, mount the display and the GPS, etc. but I was to plug it all together, fire it up and it worked right out of the gate! 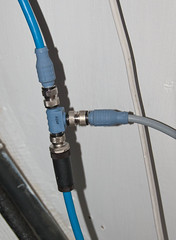 Here’s a shot of the a “T” installed showing the backbone in blue and the drop cable in grey. The black fitting is a field installed fitting whereas the other two are factory pre-installed fittings. The field installable connector has some pretty small screws and was a tad tricky to line everything up, but that is probably due to my large meat hooks. I was able to do it just fine. The waterproof fitting that goes over it all was very tight and I’m sure it has a great seal.

right now I have the following in my system:

I plan to add a depthspeedtemperature gauge to replace my Standard Horizon DS50 depth only unit, but I’m waiting for Airmar’s DST900 to come out (it’s a year late according to rumor) which has the D/S/T and no moving parts! That will be awesome! For now, I’m going to Magruber the DS50 onto the network and maybe if that works fine I’ll just live with that (hurry up Airmar!). We also want to add a rudder angle indicator. I just haven’t gotten to that yet.

Tonight I’ll secure all the wiring and figure out where the GPS will be placed. 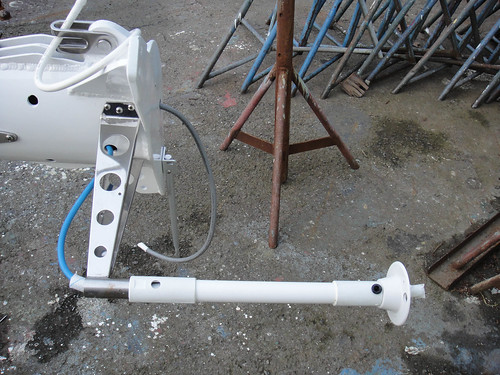 A while back I started doing some research about how to mount the Maretron WSO100 weather station to the masthead. The yard had recommended I use a piece of flatbar and I went as far as ordering a piece and roughing it out, but that approach really bothered me. First the instrument would be directly at mast height level and I felt it would block the nav light too much. Secondly I was concerned it would be low enough to snag the spinnaker.

This weekend while rummaging around Second Wave I happened on a Glomex V9173 TV Antenna bracket (look around prices online range from \$30 to over \$100 for new ones) to which I attached a Shakespeare extension mast. The whole thing cost me about \$40 since I bought everything at Second Wave. This setup avoids the problems I mentioned above and the whole thing weighs less than the flat bar. I still need to make or find some grommets to protect the wires where they exit the mast, but my wiring projects are coming along nicely since I was able to solve this problem.