When we bought our Pearson 424, we knew right off the bat we had to replace the portlights and the teak eyebrow trim along the outsides of the cabin top. The existing portlights were old and leaked causing the interior teak veneer to delaminate, no structural issues. The plastic windows were also hazed over and they just looked poor. At the 2009 Seattle Boat Show we made the first decision towards the beginning of this big project in that we purchased our new portholes from New Found Metals, located in Port Townsend, WA. Its always nice to be able to support local businesses.

One time consuming piece is handling the bolts. You have to custom cut the bolts that attach the portlight to it’s outer trim. Every hull is a different thickness so they can’t really stock every possible length. I used my handy vise, cut them with the Fein Multimaster, cleaned them up with the dremel and a sanding wheel and then used two bolts to ensure the threads were clean. Here’s a video of that process.

As we’re replacing the portlights, we’re also putting up new wood along the interior teak along the insides of the cabin top. We will match the new headliner to this when we replace that as well. Painting it all white will brighten the boat considerably and visually make the cabin feel a bit taller. We’re using 1/4” plywood, primed on the finished side at the workshop prior to installation. We epoxy the new wood to over the top of the existing wood. That is a pretty involved process of making a paper template, cutting out the new pieces, dry fitting them (which involves a lot of tweaking) then making the cut outs for the portlights and then finally epoxying the new wood in place.

Here are a bunch of photos which roughly chronicle the process. Click thru for larger pics or to see more. They look awesome, the glass is so clean and clear I keep thinking they’re open! 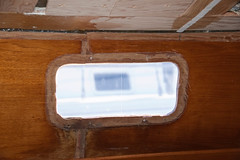 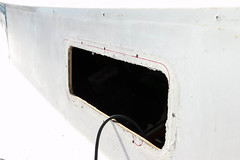 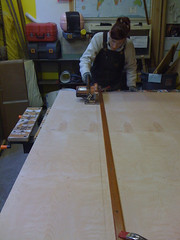 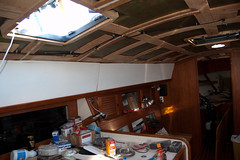 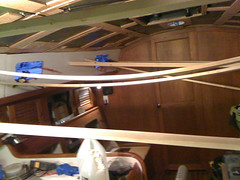 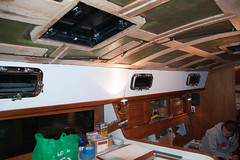