Real quick background. Our RV refrigerator, the Dometic RM2612 runs on AC Power or Propane. It involves witchcraft and physics, but it makes stuff cold. Pretty much right from the get-go the self-igniter for the Propane died. Then in Phoenix when it was 115F we learned it can't keep up with that and we lost all our food. Since then it had seemed to just not be getting cold enough. While we were in Albuquerque we took it to Camping World to get a tune-up.

After four hours, the Technician at Camping world said the igniter and the lower board were bad. I had figured this going to into it. He said they don't make the lower boards anymore. I asked him if there were 3rd party boards. He said, there are for the Norcolds, but Dometic is a Swedish company and they keep every secret. He then said the guy in the store would give us a deal on a drop-in replacement. (\$1000 or so). They did clean the flu in the unit and when lit manually it was working way better, but it still needed the new board or if it ever blew out then propane would still be flowing and it would not relight.

Here's the deal. Bill is either ignorant or the Camping World was trying to rip me off. It took me about 2 minutes on their free wifi to see that the dometic boards are widely available and that there is even a 3rd Party board with some improvements from Dinosaur Electronics.

I explained this to Bill, the Service Rep Jeanne and the parts guy. They all seemed shocked since they couldn't find one. They sent us on our way with a free cleaning. I then called Jack Sisemore's Traveland in Amarillo, TX. They had the Dinosaur Electronics board and the reigniter in stock! I paid them right over the phone to hold them for me.

Today I installed both pieces, took me about 30 minutes to remove the old ones and install the new. Refrigerator is now working awesome, automatically switches back and forth from AC to Propane. We're happy!

If you're older Dometic RM2612 is limping along, get the flu cleaned and have the lower board tested. There is a service manual in PDF on the web if you want to do the tests yourself. Its pretty easy with a multimeter.

We bought this vent at Camping World outside of Portland and have been driving around with it sitting in its box since then.  Its a drop-in replacement for the vent the bathroom which also the only manual roof vent in the motorhome. There used to be a fantastic vent with a built-in fan in our motorhome (there are manuals for it), but for some reason it had been replaced over the years with a crappy non-fan one. Because there had been one in the past though the install was super easy as the wiring was already available in the ceiling and these things just drop right in to the 14"x14" vent hole which is standard on all motorhomes.

While I was up there I slathered some Dicor Lap Sealant on a bunch of spots we think could leak and I spent about two hours cleaning regular house caulk on top of tree-sap on top of old sealant that was all around the skylight in our shower. I was able to clean it all up back to the original, still maleable sealant, and with the fresh coating that sylight seems to be water tight. It rained a few hours later, so hopefully that didn't mess anything up. Nothing leaked though!

Now the shower floor feels solid and the p-trap should be protected from being damaged again.

For any of you doing this kind of thing, be sure not to block your access to the p-trap or wiring when you put the boards in. Also, its very likely I now have a high spot in the shower, so we may have to sponge up or squeegee up water after our showers which doesn't run down the drain. Not that a big deal, we never level the rig anyway. pow!

Our beach cruiser bikes have multiple curving top bars and didn't fit the bike rack we bought at Harbor Freight. Part of the frame would rub on the metal arms and slowly grind the paint off our sweet rides. \$1 pool noodle from WalMart fixed that right up! 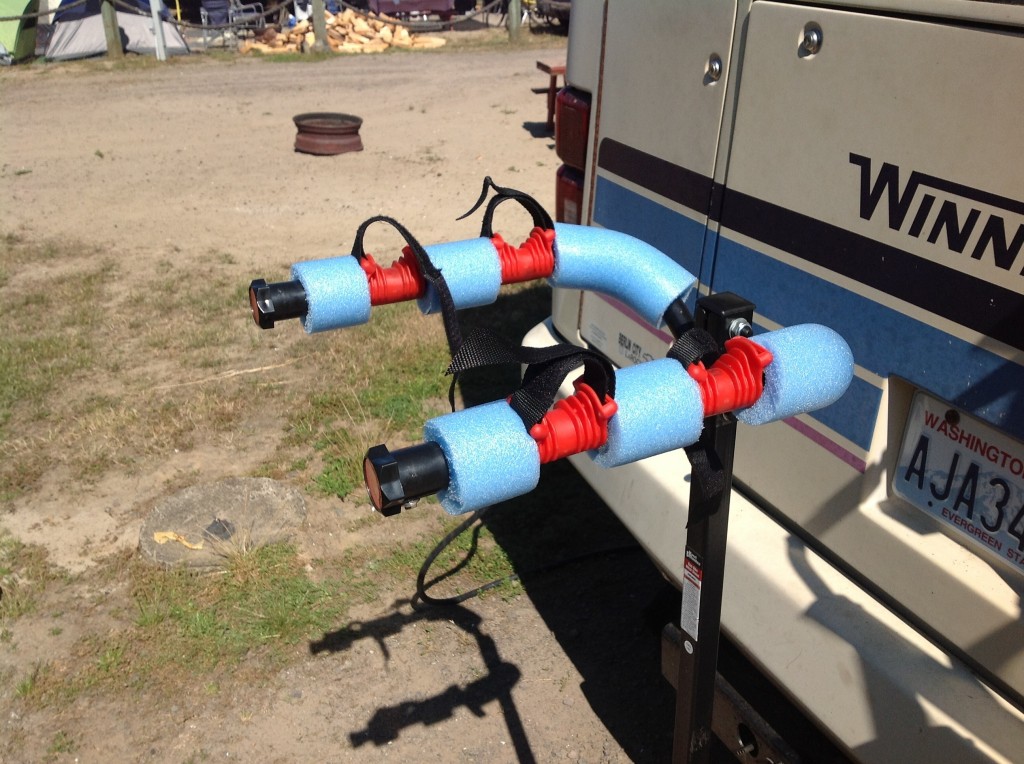 Reflectix is cheap and awesome. We used it on the boat and its works great. Here we've not only made the front windows darker than just the curtain, but also added some heat shielding. Yay for cheap! 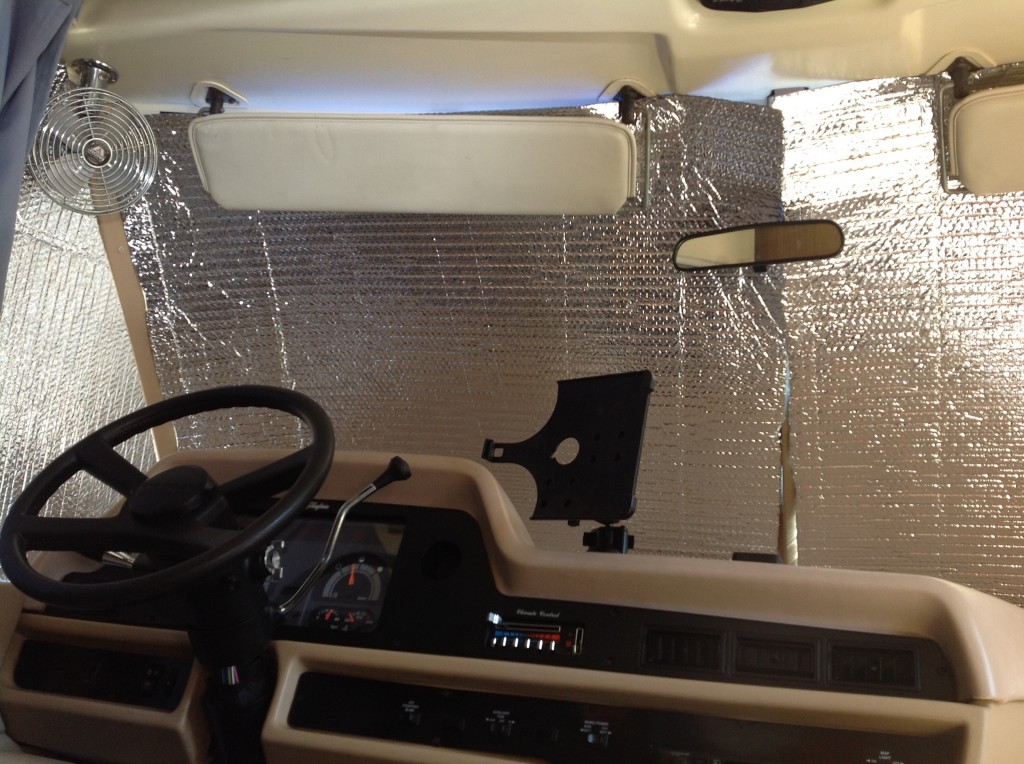 Available at Home Depot's in the US, but unfortunately not in Mexico!

We finally made it out of Seattle!! We were recovering all morning from last nights bon voyage party and ran more errands this afternoon, including another stop at Matty's house to use the shower and drop off a few things.

Thanks to everyone who cam down to Golden Gardens for the send off, it was a great spot and Dawn and I were happy to see everyone! We can't wait to see you all soon, maybe on the road, maybe in Mexico, or some other exotic location! We miss you all already!

After running errands including get a bike rack and some more tools from Harbor Freight it was almost 8pm so we decided to head to the Seattle\Tacoma KOA Campground 12 miles away in Kent. We just got back from taking a walk through the place, and while the setup is very compact, there are a lot of amenities, including a heated pool, showers, large chess and checker boards, dog park. Its pretty nice. The place is packed too.

Of course no blog entry from me would be complete without a project or two. Two days we used the shower for the first time and immediately after we noticed water dripping out from under the coach. After a little online research and digging around under the shower floor, i figured out the shower pan sags enough with an adult in it that the p-trap bears all the weight. This lead to the p-trap becoming cracked and thus the leaks. We bought a new p-trap and I installed it shortly after we arrived here in Kent. When it dries out under there, I'll cut two pieces of 3/4" plywood to add additional bracing.

It feels good to finally be on the road. Road Trip 2012 is underway!!