Natasha and Own are the new owners of Pearson 424 Hull number 152, now christened as sv Wine-O Rhino.

Fair winds and Following Seas to both of you and your new boat!

I love to do me some research and as I was figuring out what to do about our fishing setup, I read The Cruiser's Handbook of Fishing by Scott and Wendy Bannerot. I even had a couple of one on one email exchanges with Scott about our setup. Some of the advice is a bit outside our budget the general advice in the book is awesome and I highly recommend it.

I did end up following some of his advice and bought a really big Penn 12/0 Senator  reel (used on EBAY). I originally had planned to mount this in a fixed fashion without a pole on the stern pulpit. I couldn't figure out how to make that happen and others advised me I'd never be able to reel in any sizeable fishes that way. Now if you get an Alvey Deck Winch which is mentioned in the book (>\$1000 not available in the US) then yes you can do this. We made a last minute purchase of a pole in West Marine in San Diego. And now that we've caught and landed two 15" bonitos and two 36"+ Dorado I can tell you yep, without being able to "pump the rod" to get slack line form the fish, there is no way we could reel in those suckers without the rod.

The rest of our gear includes several lures which were recommended by Outdoor Emporium in Seattle. I forget the guys name, but he was awesome! Our lures break down into the "Mexican flag" colored feather looking squid things, a purple and black cedar plug and a red\white cedar plug. We caught bonito with the Mexican flag and we caught the Dorado with the purple\black plug. My assumption was the Dorado eat the bonito and the purple\black looked more like a bonito. Throughout the Baja Fleet boats were fishing with similar gear and caught similar to us as well as a 67" Wahoo and some squid of various sizes. One boat was even using homemade lures made from Heineken cans with good success! 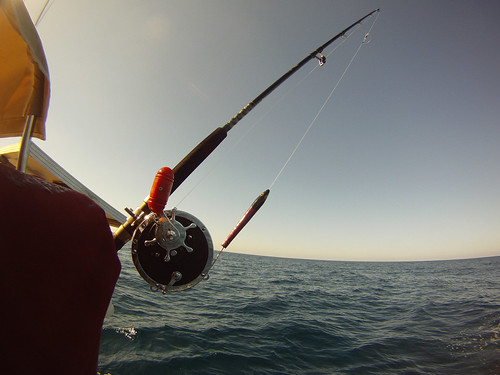 In order to land the fish, you need a gaff to haul it on deck. The retail gaffs were too short to pull a fish onto our boat or too expensive so, we made our own. The gaff hook itself is the same as the commercial ones. We bought it at the chandlery in Newport, OR. For the pole, we used a broom handle.

When we bring the fish alongside the boat we gaff it, haul it on deck and hold it down and use cheap vodka to subdue the fish by spraying it on its gills and in the mouth. This makes the trashing stop pretty quick. We then bleed the fish and clean it on the side deck. The fillets are then soaked in salt water and taken below. Dawn does the final filleting and skin removal in the galley while I wash down the boat. The whole process can be a bit messy!

Our system has worked pretty well so far for fishing while on passage.

We sold almost all of our big items which means the workshop is looking a tad tidier. I still have the RADAR for sale and I've lowered the price to \$200.

I'm going to take a bunch of pictures of it, measure all the cable lengths and fillet out the splice so it'll be easier for the new owner.

If you're interested drop me a note in the comments.