We got a lot done but not as much as we wanted.

Dawn pulled out the two starboard side 5x12 plastic (cringe) Beckson portholes and cut out a big section of completely dry rotted teak around each porthole. I then resized the openings to fit the new portholes. It was about a 1/4” of material that needed to be removed.  Dawn then made a paper template of the area we needed to repair and cut that out of 1/4” plywood. We then attached that new piece of wood directly to the hull with 3M 5200 and tied into the drip rail with screws. This gives us a base layer on top of which we’ll be installing an additional layer of 1/4” A4 Birch plywood which will then become the painted finished surface. When that is done we’ll install the new gorgeous New Found Metals portholes. 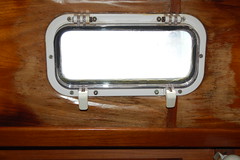 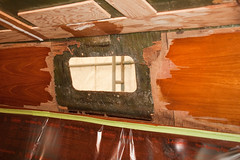 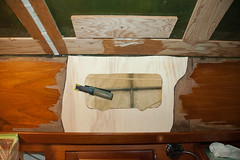 The v-drive work was pretty easy. I pulled the cover drained the water and using a screwdriver pulled away a lot of the corrosion. In the process I broke off a bit of metal around one of the bolt holes and that made me nervous so I’m going to talk to Walter Gear about the V-Drive and see if I should keep going or call it good enough for now and wait for the whole unit to die. They don’t make the RV-20 anymore so replacing it would be a bit complicated but other owners have done it. 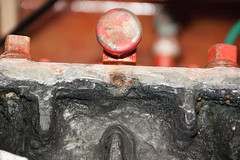 All the bits of the windlass are now removed and the holes are ready to be glassed closed.

I ground off the head of the one thru-hull and was not able to shove it through as the yard suggested so I’m going to let them get it the rest of the way out. I’m also going to have them pull and close the knot meter thru-hull. Airmar is coming out with a new DepthSpeedTemperature instrument that has no log wheel which means no wheel to get gummed up. I’m waiting to hear more about that, but for now we’ll live with the depth transducer as is and then replace it when the new Airmar is available.

I did a bit of grunt work and I by that I mean work involving a lot of grunting as I wriggled around in the bilge and the stern lazerette (which is actually quite roomy) and pulled all of the bilge pump hoses (main, backup and manual) which were original, covered in oil in the bilge and as I found later one of which also had a big cut in it which would definitely have let water in the boat when pumping out and if a following sea came in the hose. The hose clamps on the stern are completely rusted and I will need to cut those off and replace with 316 Stainless Steel clamps. This is part of a general pulling and replace of below the waterline hoses I’m doing since we’re sitting out high and dry. Here’s a shot of me in the bilge. 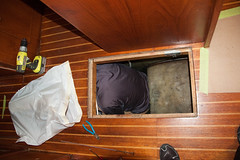