Sorry for such infrequent updates, but we’ve been busy getting all of our friend married -- wedding number 3 in as many weeks is Saturday -- as well working on boat projects.

Wedding number 1, over the 4th of July weekend, was in Cle Elum. Lars and Jenny we’re absolutely beautiful and to be able to have all of our Burner friends together for a solid three days was an absolute gift. The weddding was meant to be a “Goofball Wedding” so I had to bust out my green PeaBear costume for the ceremony! (Have to find a pic of that still)

Wedding number 2 was in Roche Harbor and we took the boat up. The weather didn’t cooperate too much with sailing, but we did get a few hours in, used the Hydrovane and even had to put a reef in the main, I was glad I finished finished installing the reefing hardware on the main boom the day before!

Julia’s and Jason’s wedding was held at anchor on the biggest spinningest raftup I have ever been on. The AnderGuards (as we call them anyway) are an awesome couple and know how to throw a party. Some of us water people went ashore to partake of the Roche Harbor Bar as well. The lamb burger isn’t all that, skip it. The rum runner is delicious, have 3 instead! 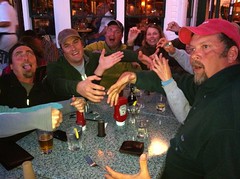 On the way back we went to Blind Bay on Shaw Island. We went for a long walk on the island around the bay and enjoined some very good ice cream from the Shaw General store which first opened in 1899!! That night we took a dinghy of wood to Blind Island for a night of fire and marshmallows. 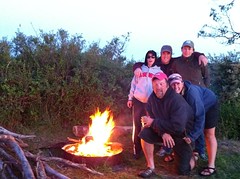 The night after was spent in La Conner, WA after handling the tricky navigation of the Swinomish Channel. The depths in Swinomish are supposed to be 6’8” at low tides, but can be a bit all over the place (usually deeper, but sometimes not) given that they don’t’ dredge it as much as they used to. La Conner is very cute town and if the Swinomish channel has been scaring you off, don’t’ let it. Just plan to go in with at least +X feet of tied where X = (7’ + Your Draft + 2 feet) and you should be fine. Also, don’t’ leave La Conner until you have similar depths. Aside from that I think it’s very doable but WAY easier for those shallow draft Bayliner wake machines.

Since we got back I changed the oil, installed new oil cooling lines which were leaking, changed the raw water impeller and the zinc in the heat exchanger. 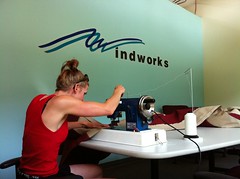 Dawn has been working on organizing our medical kit and working on the sail covers. Because it was too windy to sew on the dock, we spent about 4 hours in the conference room at Windworks sewing all the main stitching for the covers. Dawn ran the machine and I manhandled the cloth to allow her to sew more easily. We can’t thank Greg and the staff at Windworks enough for loaning us the conference room. That was absolutely awesome!!

Wedding number 3 is tomorrow, I’ll save that for the next post, and we’ll do some more technical posts on the sail covers as well.

whew… I’m going to need a vacation after this 3 week vacation!