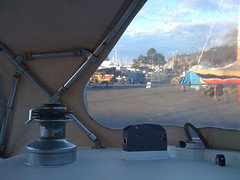 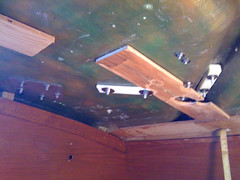 In it’s original, more outboard location, a handle in the mainsheet winch could only be rotated about 1/2 way round because it hit the dodger. to grind in the sheet you had to saw back and forth on the handle. I like to get up on the winch and grind so it needed to move inboard. In order to make that work and have the line run fair (shout out to Brion Toss) I added a cheek block just where the line comes under the dodger to align it to the new winch location (as suggested by Chris Tutmark). This block is mounted to the ridge in the cabin top and through a custom shaped starboard block I made. The rope clutch is also a new addition and replaces the cleat originally used for the mainsheet, it is also mounted on a starboard block I shaped. I added a fairlead for the traveler line so it didn’t rub so hard on the dodger canvas and although it is not in this picture there is a cleat for this line on the deck as well.

The picture on the right shows the backing plates, washers and fender washers used to back the various pieces of hardware all of which are a major upgrade from the very small washers used prior. All of the holes were drilled larger than needed, epoxied closed to protect the core and re-drilled to the proper size. Everything was bedded using Sika Flex 291.

A new mainsheet was made out of 1/2” Samson Trophy Braid because it’s a bit softer in the hand. This has also been installed. There are now only three original lines on the boat, the furling line and the job sheets and they are on the list.