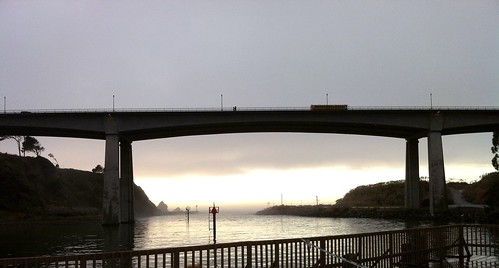 This shot of the Noyo River Bar looking West shows the narrow 90 foot wide entrance to the river. We had read that this was a difficult and possibly dangerous crossing that should only be undertaken in calm seas. After we had motored around Cape Mendecino in NOT calm seas we knew we could make this harbor in the daylight, which would be a new experience for us. We’d crossed all the other bars thus far in fog and at night. This would be easy.

I hailed the USCG they had an hours old bar report which said it was calm. it was foggy as we approached, they suggested we wait till high tide (2 hours) since the controlling depth (the low depth) in the channel is 6 feet 7 inches!! (we draw 6 feet). So with 2+ fathoms (12+ feet) uner our keel we crossed and headed for the Transient dock at Noyo Basin Moorage as drawn up in Charlie’s Chart. It was Sunday and no one was around and there was no contact info at the office so we just grabbed the “transient dock” and went for a walk around.

A few hours later the weekend guy from the marina says we have to move our boat because this slip is for a big 80’ fishing boat. “OK. Where should we go?”, we asked. “I don’t know, but you can’t stay here!”, was the reply. The weekend guy was a total jerk basically. Dawn was about to kill the guy! We had talked to Theo and Marion from sv Marionetta (who met up the coast) as we were on our walk and knew that they and sv Celtic Song were tied up on the other side of the river to the dock at Carine’s Fish Grotto. Since the guy from the Port was not helpful and had no suggestions, I call the restaurant and the Owner goes out and asks the two boats if we can tie to them! Celtic Song says no problem and we maneuver over and side tie to them. Whew, crises averted!

The backstory to that is that the marina lost 20+ slips in the surge from the recent Tsunami, so they were really short on slips. However that night sv Ventured came in (at night yikes!) and found a slip… so go figure.

There were several boats holed up waiting for the weather and to make repairs so we had a meetup at El Mexicano. I of course failed to take a photo, but here’s a list of boats in attendance.

The river is very narrow and windy and lined with wharfs on one side for the buildings that support the fishing boats. I thought it looked like the town in the Movie Popeye. But now that I googled that, it looks like my memory of the movie more than the actual movie. It was cool looking (and I didn’t take any pics!). However, it did rain a ton and we had to clean up some mold in the v-berth and get out the fans to keep the air moving, but all in all, it was a great place to spend a few days with all of the things we needed within a 1 or 2 mile walk away. Aside from the idiot at the Marina the people there were very nice!

We are now in Monterey taking pics of everything and waiting for the next window to jump down to San Simeon, Morro Bay, or San Luis Obispo which are North of Point Concepcion or maybe make it around the “Cape Horn of the Pacific NW” to the northern Channel Islands. All TBD as the weather is getting crappy again.. We’re going to do some projects here since its looking like our time in San Diego prior to the Ha-Ha will be limited.