This past weekend was a good one in terms of getting things. It started out with a personal economic stimulus package when we dropped some coin at Fisheries for supplies. Mostly I stocked up on spare filters, electrical wiring components and 100’ of wire I’ll use when I put in the new speakers that I bought elsewhere, more on that later, here’s what did go in this weekend. 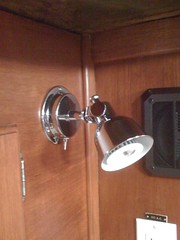 When we were cleaning the boat this summer we pulled out the reading lights in the salon. We didn’t like how they looked, some of them didn’t work and they were a bit rickety. At boat show this year we looked at all kinds of lights some with built in LEDs and other that could take an LED bulb. There weren’t as many choices as we though there were going to be, and in the end we ended up going with two lamps from ABI. One is a classic bulkhead bell type reading light and the other is similar but is mounted on a swivel, like a podium microphone.

For LED Bulbs, we chose Dr. LED bulbs for these new fixtures and LED replacement bulbs for all the existing reading lights as well. The Dr. LED bulbs put out a nice light and they aren’t nearly as hot as the old bulbs which were so hot you could burn yourself on the fixture when pointing the light. They’re a tad expensive (ok a lot expensive) but they also reduce the energy we use which means running the engine less!! 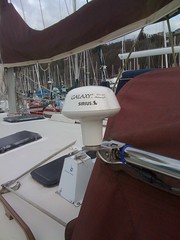 When I put the new stereo in this summer, we were using the little hockey puck style antenna which we ran through a hatch and let it sit free on the cabin top. The new antenna is a Shakespeare SRA40 which I have mounted temporarily on the dodger hand railing. Eventually I plan to relocate this, the C.A.R.D., and GPS antennas, which are mounted on the other side of the dodger, to the mizzen mast or a stern mounted antenna pole. I’ve not decided yet. I think the Mizzen mast may be the only option give the mizzen boom’s swing through the stern area. I’ll decide all that when we starting working on the rigging and hauling the masts. I think the radio already holds the signal better and we’re just sitting at the dock.