I was reading this post on Panbo about the RogueWave Wi-Fi system which is the same as the Ubiquiti Bullet M2-HP I am using at a much inflated price. Granted I don’t’ have anyone to call for tech support, but for this, it isn’t something I need tech support. Here’s a picture of my setup which I have mounted on my mizzen masthead. 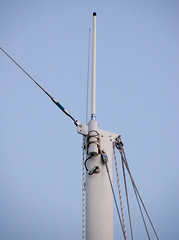 In order to protect the radio and secure it to the masthead I made a PVC sleeve that the radio is inside and the the antenna attaches to. I then made a teak bracket to hold the sleeve to the mast because I couldn’t think of anything better and was running out of time. Here’s the basics on that.

That’s all of the pieces and how they go together. Let me know if you need me to write up any more about the wiring or the actual network setup. One thing I will not is that the POE and Linksys are currently running on AC, I plan to convert them to run directly of the DC power in the future.