Here’s a series of shots of polishing and installing our chainplates. We polished them by hand starting by cleaning them with water and a scouring pad, then sanding them with progressively higher grained papers. The first go was with 100 grit and we ended up at 1200 grit. Mounting the paper to a board or a table was helpful, but this is intense labor and is very hard on the hands. However, paying someone to do it ridiculous. We did not put the chainplates (or any of the rigging we polished) on an actual polishing wheel, the 1200 grit seemed like it was as good as we were going to get.

As as DIY projects go, this is pretty easy one and just requires sandpaper, a bunch of free time (or late nights in my case) and a desire to stick through it.

Thanks to Port Townsend Rigging for the tips and the encouragement!

Here’s the chainplate pulled and lying on the deck when we were in the paint shed back in November 2010. 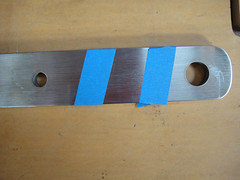 After cleaning them up we marked where the deck would be and covered that area with butyl. 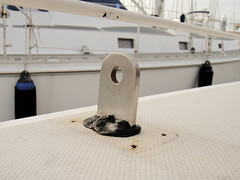 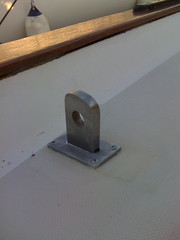 The small space was then filled with Sika Flex, the chainplate covers were installed and any excess Sika Flex was cleaned off. . 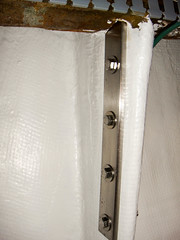 A shot of the bolted on chainplate and the green bonding wire (which were also replaced) from below decks.

These pictures were taken in May 2010 and thus far we have had no chainplate leaking. (knock on teak)