I edited the video from pulling the engine, the picture is a bit cloudy because the Go Pro fogged up in its waterproof case. (still learning how to use it) Its not that fascinating to watch, but its here just the same, so watch it you will! 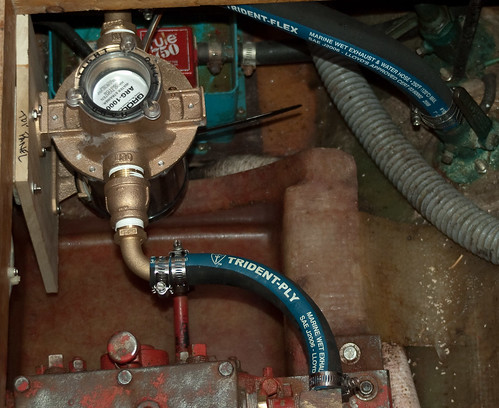 This weekend I finished installing the starter. Along the way I decided to replace the bonding wire on the starter to the v-drive with tinned wire because the existing wire was corroded. As I was doing this, I also decided to replace the bonding wire from the v-drive to the raw water strainer because it had broken a few months back. Removing the nut on the raw water strainer lead to the strainer breaking.  The strainer (bronze) was bolted to an aluminum bracket with stainless steel screws and it had started to bend at the hanger points. I was planning to replace this fall when I haul out, but turns out I needed to do it today. I put a board on that aluminum bracket and put in a new raw water strainer. All in all it was pretty simple, the new fittings lined up a bit differently, but the new strainer looks great and will provide years of reliable service! I have one more bonding wire to put in, just need a 8 AWG to number 10 screw ring terminal to check that one off the list. 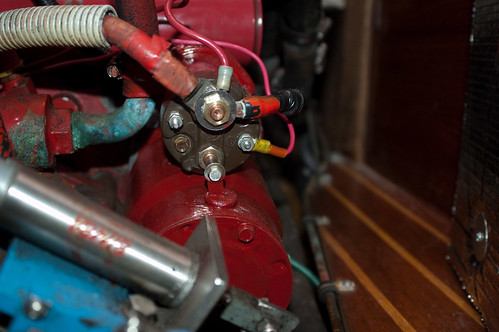 I also finished installing the starter this weekend after I painted it and let it dry. It pretty much popped right in, I fastened in all the bolts to the block, put the new bonding wires on and then hooked up the battery cables and starter switch. She started up on the first try and water ran well through the exhaust. Everything is look good! 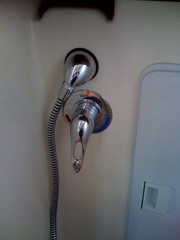 Finally, I finished our plumbing upgrade as well by putting in a new shower mixer valve and handheld wall mount sprayer. The original faucet was a 4” on center individual knobs for hot and cold and had a fitting for the shower nozzle right on the faucet. When I pulled this off the wall I was left with two holes in the whole. I put a Shurflo mixer volume control in the bottom hole and a wall mount for the shower nozzle in the top hole. This completes a project I started last summer! 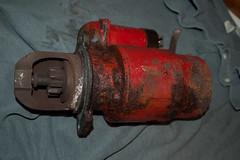 For about two months now we’ve had intermittent luck getting our engine (Westerbeke 58 circa 1981) to start. I at first assumed I had been a batter minder and screwed those up so I did a bunch of tests and they seemed ok. I then started tracing wires and reading up on troubleshooting starting diesel motors in Nigel Calder’s book. That lead the section on bypassing the starter switch and the solenoid itself using a screwdriver. I won’t go into that too much, just to say, its awesome when you do it and a bit scary. ;-) Using that method for the past couple of weeks we’ve been able to get her started. The workaround pointed clearly to a solenoid failure. The plan for repair was to pull the starter and the attached solenoid and either replace them or get them rebuilt.

I started out (no pun intended) by calling up my local Westerbeke dealer Gallery Marine Services and asking them if they did this kind of work. They said “sure we can send it out” and I said can I just contact the place you send them and he totally coughed up Blanchard Auto Electric. I though this was very cool, they could have easily said, “bring it in” and charged me extra. I’ve not done any business with them really but Gallery Marine Services seems like an good place thus far!

I took my starter over to Blanchard Auto Electric and even MORE great service ensued! I walk in and talk to the proverbial guy at the counter. He looks some stuff up in the computer, looks in some books and says well you have two options for a new one. One costs \$260 and the other \$160 (numbers are approximate recollections) and then goes, go through that door into the shop, follow the yellow line on the floor and ask Todd if the one you have now is worth rebuilding. I go back and see Todd who is very much deep in the shop behind a wall of starter motors of all sizes. The only way he could looked more prophetic would have been had he been chanting incantations over a boiling pot of oil and diesel parts. Todd and I talked about the merits of the \$100 price difference and he wanted to tell me to just go ahead and buy the cheaper one, but he knew they had recently changed ownership and wasn’t sure if his past experience would reflect on current quality. So Todd looks at my starter and says let me take a look at tomorrow and I’ll let you know if what you have is worth rebuilding.

I drop my 40lb starter off with Todd and go to work thinking I’d get a call the next morning. Three hours later the same day Todd calls me up and goes, “Well I broke one the corroded bolts on your starter trying to get back open, but I was able to get it apart and the starter is perfectly fine. I put a new solenoid on the starter and you’ll be good to go, come down and pick it up.”

The grand total was like \$85 for everything, totally awesome experience with Blanchard Auto Electric.

All I have to do now is knock the rust off of the starter with a wire wheel on my new Bench Grinder (ah toys!), paint it again and reinstall it, that should be finished tonight if not Saturday and we should be back to dependable starting!