Deep Playa has been in La Paz for nearly a month now so I wanted to write a blog post about our experience of “living” at anchor in Bahia de La Paz.  So far this is the longest extended stay in one anchorage since leaving Seattle (with the exception of leaving for a couple short day sails).  La Paz is an international port city in Baja California Sur (B.C.S), Mexico in the southeast corner of Bahia de La Paz on the Sea of Cortez. 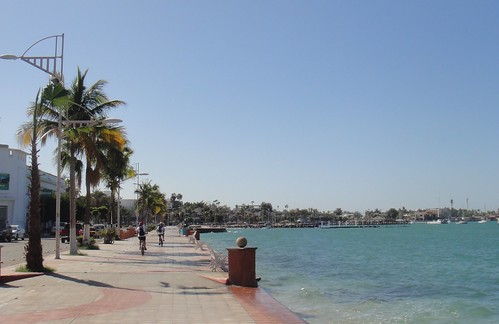 The Malecon in La Paz

It is a must stop over for cruisers who are on their way up the Sea of Cortez, crossing the Sea to mainland Mexico or for those prepping for the “Puddle Jump” to the South Pacific in the Spring.  There is a cruisers VHF net at 0800 on 22A Monday through Friday which provides you with very helpful information like weather, marina updates, bay information and valuable “local” knowledge about where to find what you need.  We also joined the local cruiser’s club that is hosted in Marina de La Paz, Club Cruceros de La Paz  http://www.clubcruceros.org/. They do a lot of charity work in the local community and provide a wealth of knowledge to cruisers about the area and cruising in Mexico. A lot of the members have been living in La Paz for more than 15 years! We understand how cruisers can get stuck here for extended periods of time!   We will definitely be utilizing more of the services they offer when we return in the Spring when heading north up the Sea. 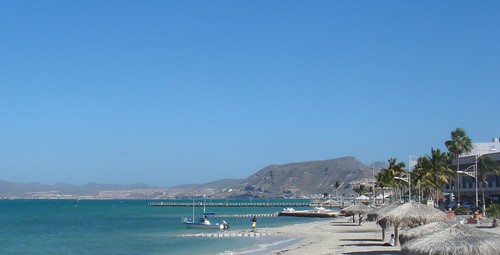 Life in La Paz is pretty relaxed and laid back.  While there was the occasional rumor about a dinghy that had rode off into the sunset all on it’s own, we felt perfectly safe and occasionally left our dinghy unlocked at the dinghy dock at Marina de La Paz (which does have security).  I took multiple runs throughout the city, mostly on the Malecon, which wraps along the coast for several miles, and even has a nifty stop where they installed exercise equipment for pull ups, push ups, sit ups and stretching.  Getting around town was no problem when on foot and we had a couple copies of local maps which aided in the effort. 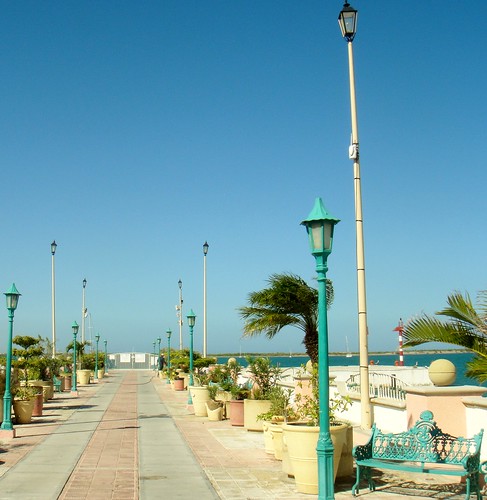 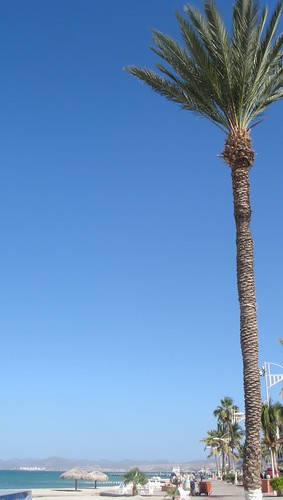 The Collectivos (local small buses that are more like taxis) are a cheap way to get around but take quite some time in getting familiar with their usage.  We have only been successful in taking one to the Soriana.  I am certain with more time we would be more comfortable in utilizing this cheap mode of transportation.  The local area hosted a multitude of marina chandleries (that sometimes monitored channel 22A), local restaurants, taco stands (we found our fav stand with \$10 peso tacos) and bodegas (little family owned stores with beer and soda) all within walking distance.  The local grocery store Chedraui was only a 15 minute walk from the marina and a 50 peso taxi ride back.  They had most everything that you could want from a grocery store and more.  There was also a Mega, similar to Wal-Mart, nearby, which also had a couple hair salons, coffee shops and little restaurants in the same complex. Although we didn’t venture that far there was a Home Depot and Wal-Mart.  We also were recommended to a local seamstress, Katty, from s/v Lightspeed http://www.ecosailingcharters.com/, who makes custom spandex dive suits for \$49 pesos each!  I got black, because it’s slimming, and Patrick of course, got green.  I am planning on making him a cape and a large P for his chest.  We totally look like super heroes! These will come in handy while diving in waters that are a bit chilly and infested with stinging jellies.   Patrick also found all he needed when it came to electronics at Radio Shack and a couple local electronics stores that sold everything from serial cables to tiny drum kits for little kids.  The two local stores he recommends visiting, which were cheaper than Radio Shack, are Sterens (across from the Soriana) and El Sondido Electronics.

I have to say the best part of La Paz has been hanging around with great friends from the Pacific NW, making new and solidifying relationships that we made along the way down the west coast.  We met up with our friends from s/v Eagle  http://www.sailblogs.com/member/bigleftturn/ who we last saw in passing at the start of the Baja Ha-Ha in San Diego, s/v Bella Star, who we last saw in Newport, Oregon, s/v Lightspeed, and s/v Ventured http://svventured.wordpress.com/who we see all the time!

One of our fav spots for the cruising community is The Shack.  It is a great restaurant owned by a Travis, hailing from Texas, his wife, Rosie, hailing from Mexico and their two very cute kids.  This place makes the best coconut shrimp I have ever had (Rosie’s signature dish), huge Texas-sized burgers (and I don’t even like beef, but wow, this is something to be had), and awesome \$15 peso margaritas for happy hour. 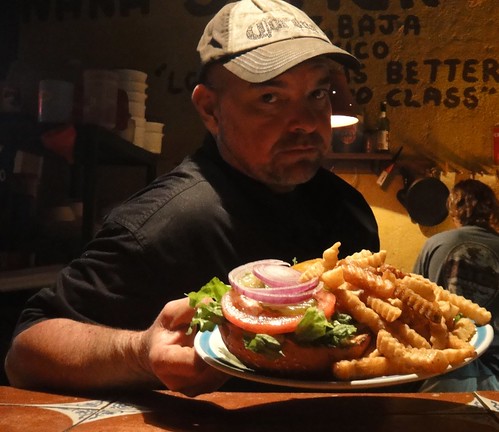 *Travis and his awesome Texan Blue Cheese Burger with Bacon 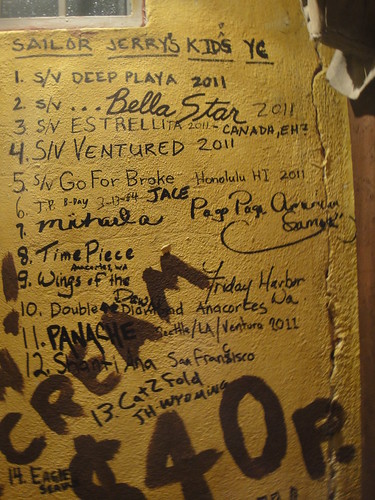 *Sailor Jerry’s Kids Yacht Club has increased it’s membership quickly. We are still waiting for the dues to be paid!!

This was the destination to get together all the cruisin’ folks for a couple drinks and a round of darts (which I just learned how to throw, but not well).  Nicole from s/v Bella Star http://www.svbellastar.com/ is apparently a dart savant and kicked everyone’s ass including the guys who brought their own special darts.  Way to go Nickky! 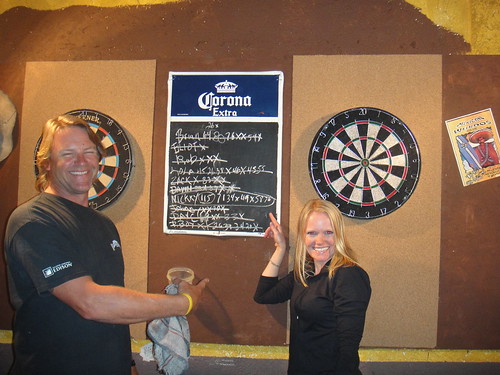 The Ringer!  Nicole with 115 points!!!! Johnny from s/v Michaela is stunned by her first-timer skills. 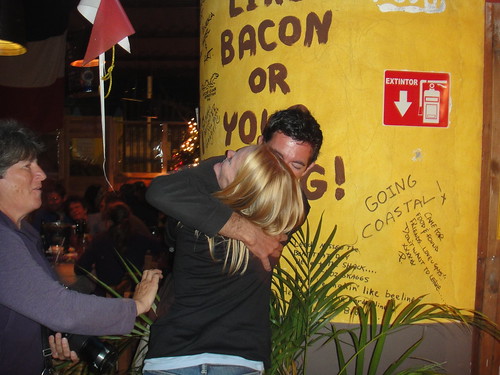 Aaron and Jeannie congratulating the winner!

While the winds are blowing too hard for us to leave the boat at anchor, I have been trying my hand at baking on the boat (even though I really don’t consider myself much of one).  I have been craving cupcakes and pizza so I had to take matters into my own hands.  The cupcakes were a little heavy but you try to whip butter “until light and fluffy” by hand with a lousy plastic whisk!  Schweeeww what an arm work out!  But the whole wheat pizza dough came out pretty good.  Next time I think I will substitute 1/2 whole wheat flour with white flour to make it a little lighter. 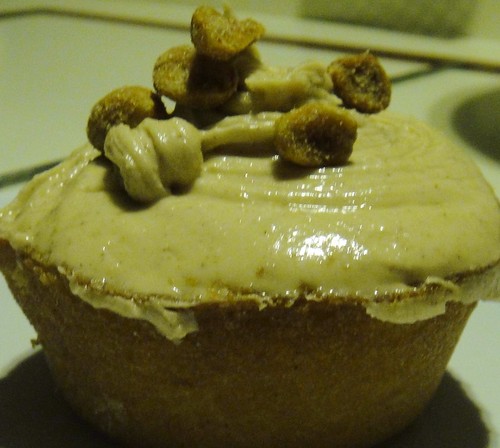 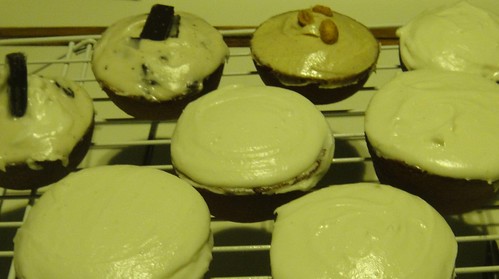 Vanilla-Vanilla (made with vanilla scraped from pods) & Mint Chocolate-Vanilla 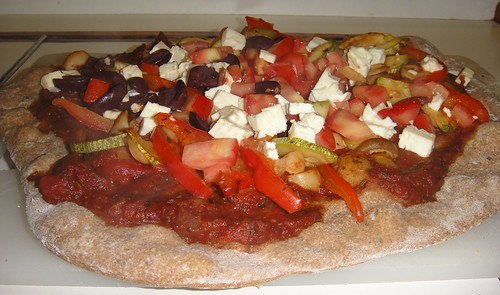 Other than the occasional Norther (long lasting wind storms from the north) that forced us to stay aboard to ensure our anchor wasn’t dragging or inadvertently ramming into another boat, we thoroughly enjoyed La Paz and plan on coming back again soon. We are off to meet Patrick’s parents in Mazatlan for Christmas. We are definitely looking forward to warmer waters and weather further south. It is funny how quickly our bodies adapted to the existing environment. We had hoped to put all of the fleeces and long pants away for an extended period of time, however, I am currently wearing wool socks, long pants, a fleece and Patrick is wearing his skull cap to keep his bald head warm. It is 70 degrees outside. Last night we donned jackets and I actually began to shiver as the temperature dropped to 55 degrees.

Off to Mazatlan!  Feliz Navidad with the ‘rents!