That was a question all cruisers were asking each other after the completion of the Baja Ha Ha XVIII in Cabo San Lucas, Mexico.  Cabo San Lucas is located on the most southern tip of the Baja Peninsula in the state of Baja Sur (South in Spanish)  It is affectionately known as “Cabo” which means cape in Spanish.  Hablo poco Español

There are only a few choices.  Either you head north to La Paz for Thanksgiving (which we had planned), take the couple days sail over to Mazatlan or do the Baja Bash, which is for those who were not continuing on cruising in Mexico and must beat their boat and crew back up the Baja peninsula 785 miles to San Diego (ughhhhh no thanks)  If not for Matty coming for a visit, I think Deep Playa and her crew would have spent a couple days recovering from the Ha Ha and then skedaddled outta Cabo.  While Cabo has it’s “must see” attractions, for instance Playa del Amor (Lover’s Beach), Neptune’s Finger, and the 85 degree water, we really didn’t enjoy the city very much.  We knew it would be a tourist town but I don’t think we were totally prepared to be barraged by locals pandering their coffers especially after experiencing such remote and quiet anchorages on the western side of the peninsula. Patrick and I quickly got very tired of saying “no gracias…no gracias…no gracias” that we joked about opening up our own little store in Cabo pandering t-shirts and hats to tourists that simply read “No Gracias!”  We had heard from other cruisers that the bay was very rolly with loads of jet skis, parasailing boats and of course, cruise ships.  All of these nuisances added up to make for an extremely uncomfortable sleep and stay aboard Deep Playa. 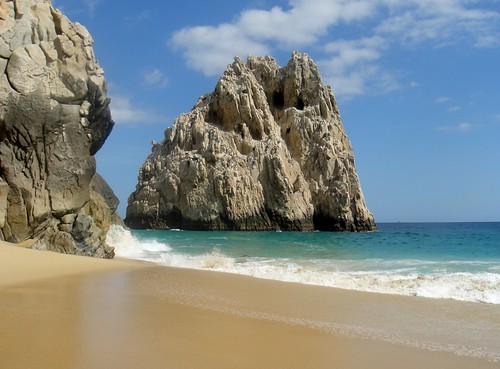 One of the highlights of the Cabo trip was Matty’s visit.  We hadn’t seen Matty since leaving Seattle 3 months prior and we kinda missed the big ol’ jerk.  (We really do love ‘em though)  It was Patrick and his 40th birthdays the end of October, so we had planned to celebrate both in Cabo.  After some trials and tribulations and communications issues we finally met up with Matty late at night in down town Cabo.  There was nothing better than seeing (and hearing) Matty running across tourist central to receive a big welcome bear hug.  Matty treated us by allowing Patrick and I to stay in his suite for a couple days (which had a huge warm shower AND a laundry) at Sirena Del Mar Resort http://www.welkcabo.com/ not too far from where Deep Playa was anchored.  This resort was beautiful, cheap and empty!  There were only a few couples staying there throughout our entire visit.  The staff was A+ and so incredibly friendly.  He also gave me a little gift by taking Patrick away for a road trip further north, where I then spent the whole day lounging in total solitude listening to breaking surf and swimming in pools warmed by the Mexican sunshine… ahhh bliss. 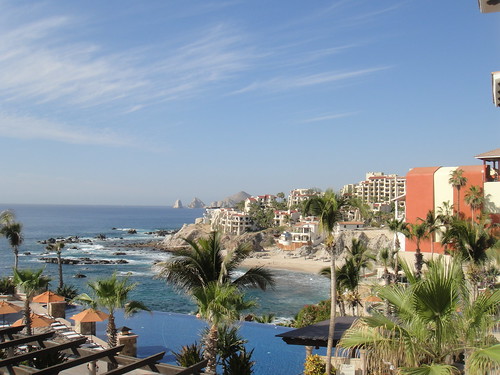 After all the Ha Ha festivities were complete and Matty departed for Seattle we quickly weighed anchor and departed Cabo to head north 17 NM for a more remote and relaxing setting.  We left Cabo for San Jose Del Cabo to get a slip in Puerto Los Cabo Marina We were lucky to acquire a slip in the section of the marina that moored huge luxury cruising and fishing yachts.  Let’s just say that we brought down the property value a bit during our stay. We were able to finally relax (after cleaning Deep Playa for the first time since departing Monterey, Ca) and enjoyed being in Mexico!  The marina’s grounds were so beautiful and well-groomed by very hard-working groundskeepers.  The marina was encircled by winding paths and gardens that contained paintings and sculptures from local Mexican artists. 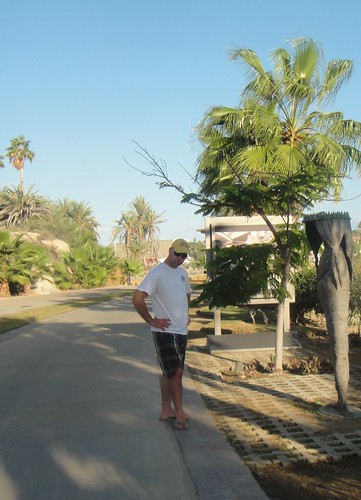 Patrick pretending to be impatient with me.  He’s standing in front of one of the local artist’s sculptures

I took off on my own several times for some much-needed exercise and felt very safe running on the beach and through the tourist areas in San Jose Del Cabo.  (Don’t worry Mom I asked the marina security staff if it was safe prior to my departure) We also enjoyed 2 for 1 all day happy hour (well only 11AM- 6PM) at Tommy’s Restaurant across the marina.  They have really great tacos (which we wound up sharing due their large size) and a very good Mexican BBQ chicken pizza baked in a wood-fired oven. 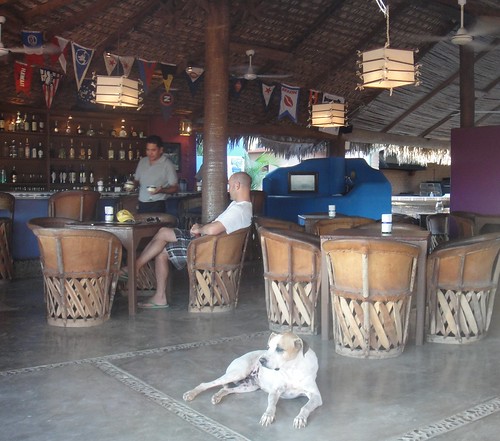 Soon it was time to cut the dock lines once again and head north towards La Paz so we could could meet up with our friends from Seattle, CB and Tawn from s/v Palarran, who would be joining us for some sailing and exploring the last week in November.  Next stop, 28 NM north to Bahia Los Frailes.