While we understood why many cruisers claim that La Paz is where cruisers come and they never leave.  We had plans to meet up with Patrick’s parents in Mazatlan for Christmas holiday week so we weighed anchor and headed back down the coast to return to Ensenada de los Muertos, which is approximately a two-day sail to Mazatlan. Mazatlan is located in the state of Sinaloa on mainland Mexico.  It is approximately located just north across the Sea of Cortez from Cabo San Lucas on the border of the Tropic of Cancer.  It borders the southern end of the Sea of Cortez and has a more lush and tropical climate compared to the desert-like climate of the Baja Peninsula.  After having our share of Northers and cooler temperatures they brought to La Paz we were ready for warmer temps and tropical waters of the mainland.  After staying overnight at La Bonanaza anchorage on Isla Espiritu Santo with s/v Bella Star we headed out early to make Los Muertos before night fall.  The water was like glass leaving the anchorage with absolutely no wind so we needed to motor to make it through the Lorenzo Channel.  As we were motoring along, I noticed a ton of fish jumping out of the calm waters so I took that as a hint and dropped the hook.  I had a feeling we were going to land something good!  A few hours later just before heading into the anchorage we heard the wonderful sound of the line whizzing out of the reel.  Patrick grabbed the rod and I got my gaff and the “fish booze” ready, which is cheap vodka in a spray bottle used to knock out the fish after it lands on board.  This time we caught a Skipjack tuna! This fish was soooo beautiful and strong!

Just as we were bleeding the tuna on deck a pod of dolphins showed up to greet us and check out our catch.  I threw the head overboard for them but they didn’t seem too interested in my measly scraps.

We quickly got on the radio to let Bella Star know that we would be hosting a tuna dinner onboard Deep Playa that night.  After quickly bleeding and fileting the fish I threw it into a marinade of soy sauce, fresh ginger, mustard and lemon juice for a couple hours.  It was a good fish but, like many say, Skipjack Tuna are the ones you throw back, and now Patrick and I agree.  It was a little too fishy for our tastes, so next time we will throw it back.

After spending some quality time hiking and enjoying nachos with Bella Star, they took off the next day for Mazatlan.  We decided to wait till the next day for the seas to settle a bit more.  The following evening we weighed anchor for Mazatlan about 7:30 in the evening.  After leaving the anchorage in a completely moon-less night we experienced rough swell (not forecasted of course) and after 45 minutes we decided to turn around and head back.

The next day we decided to leave about 4:30PM to avoid departing in the dark.  S/v Journey, who we met in La Paz and were fellow participants in the Baja Ha-Ha, buddy boated over to Isla La Piedra anchorage with us. Everything was going great, we were even able to put up all the sails, including the mizzen, and sail along at 5 knots for about 6 hours!  Just as the sun was setting and Patrick decided to go below to take a nap the winds increased and the swells built to 6-7 feet on the beam.  Patrick came up to see what was going on and decided that perhaps this was not going to be a nice calm night of sailing.  We reduced sail to a double-reefed main.  Throughout the night the winds built up to 30 knot gusts with 8-9 foot swells with a very short period.  Due to the conditions, we decided to take short naps in the cockpit while the other was on watch.  The spray was coming over the dodger and combing making for a long, cold and damp sleepless night.  At one point, I opened my eyes to see the port side solar panel flap in the wind so we had to tie it down to ensure it didn’t flap off the boat.  Around 2:00 in the morning we chatted with Journey about our decision to turn up into the wind and the swell for a few hours to make for a more comfortable ride and they agreed and followed our lead.  Finally about 4:00AM we were able to turn down wind, which put the swell and wind on our stern and made for a MUCH more comfortable ride.  We were able to watch the sun rise just as Mazatlan came in to view.  Oh what a beautiful sunrise it was for such very tired eyes. 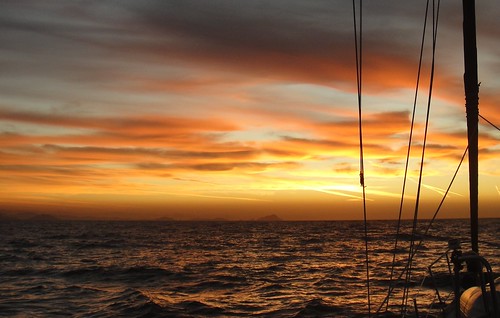 After weighing anchor in Isla La Piedra anchorage we crashed hard for many hours.  We didn’t even drop the dinghy in the water the next day. At least we were in Mazatlan, in warmer weather and water!  Or at least we had hoped…but no mi amigo…it was only 68 degrees and the water was 65!!! AAAGGGHHHHH!!!!!!!!