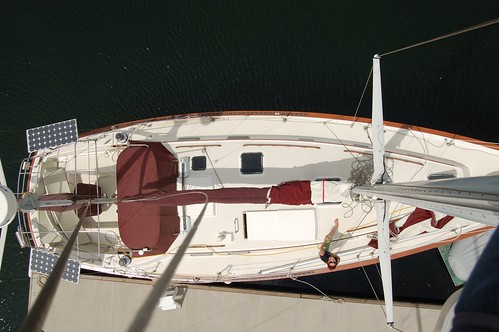 Dawn and I worked on Deep Playa over the long weekend and as part of that I took my first trip up the mast as you can see from the mandatory masthead photo. Here's proof I went all the way up to the tippy top.

Last week a contractor was supposed to come out and do some fiberglass work. They got hung up on another boat and we need to reschedule. To prep for that we took a lot of stuff off the boat and that lead to a lot of running around to get stuff done since some of the things we needed were at home. Another thing which hinders our ability to get things done is the steep learning curve on materials, tools and just having supplies on hand. We really need to stock up on stainless steel screws, bolts, heat-shrink wiring connectors, etc. All kinds of stuff. In the past couple of weeks I have also bought a heat gun and a soldering iron. Both of which I think are going to be worth their weight in gold in the long run!

As part of our on going cleaning efforts we pulled all the cushions off and took them to D.A. Burns to be cleaned. We also started pulling down the last of the hull liner in the aft cabin. After that we'll use the heat gun to pull off all the glue. We tried a little test patch and it worked awesome the glue pulls right off pretty cleanly.

Here's a quick list of what's actually getting done!

OK, that's a pretty long blog post so I'll call it good. The summary is projects continue some small one completing and as always more projects revealed. :-)